If you aren’t a student of history, you may not be aquainted with the term “Fifth Column.” These days, you’d do well to acquaint yourself with it.

Many people have been asking why unqualified people are being appointed to posts in our government they can’t possible handle. They can’t do the jobs they’ve been given, important jobs that keep the country running, so why are they there?

Apparently, they’re their because of their loyalty to Trump. And that’s the only reason they’re there. That’s what matters. But what are these loyal people there to do, because they must be there to do something, right? They can’t just be there to collect salaries as spoils, rewards, or hush money for what happened on the campaign.

Turns out, they’re actually spies. And they aren’t confined to within the govt.

In an article released by The Hill’s Ali Breland today, entitled Steve Bannon Sought to Spy on Facebook, it becomes apparent there’s a whole lot of fifth column action going on.

According to internal emails obtained by the news outlet, Bannon was seeking to gain insight into Facebook’s hiring process.

“There is one for a DC-based ‘Public Policy Manager’ at Facebook’s What’s APP [sic] division. LinkedIn sent me a notice about some job openings,” Chris Gacek, a former congressional staffer who works for the conservative Family Research Council, wrote on Aug. 1, according to Buzzfeed. Gacek reportedly gave Bannon the idea of infiltrating Facebook.

“This seems perfect for Breitbart to flood the zone with candidates of all stripe who will report back to you / Milo [Yiannopoulos] with INTEL about the job application process over at FB,” Gacek, who works at the  Family Research Council, continued.

Bannon forwarded the emails to Yiannopoulos, Breitbart’s former tech editor, later that day. Yiannopoulos resigned from the conservative website in February after a video surfaced of him defending pedophilia.

It’s unclear if Yiannopoulos, Bannon or Gacek pursued the plan further than the email exchange in August,

If you’re not weirded out by this, you really should be. There’s a whole lot of Bannon-Sessions-Trump activities that are straight up what Americans fought against in WWII.

Given Bannon already said he’s using the Nazi playbook and wants to be the GOP’s Leni Riefenstahl, in a previous interview, this sort of behavior should be no surprise. But I am constantly surprised by people not noticing what’s going on and failing to understanding stuff for what it is.

Look at what was said: This seems perfect for Breitbart to flood the zone with candidates of all stripe who will report back…   Chris Gacek is not floating just GOP or conservative candidates. He’s flooding the company with candidates of all stripes. The goal is to understand the application process, then craft a candidate that will pass with flying colors. The goal is to get someone in there to spy, for Bannon, who at the time was in the White House working for Trump (and Sessions).

And the person who is suggesting to Bannon they infiltrate Facebook,  is Chris Gacek. He works for the supposedly Christian, Family Research Council. I mean, seriously? How twisted is this. This isn’t family research. This has nothing to do with Christian behavior. This is straight up Fifth Column espionage with a political agenda.

I think a broad spectrum of voices need to be heard to make a democracy function. Unity out of diverse views makes a democracy. What doesn’t make a democracy is one group, with extreme views about everything, attempting to take over from within.

I think it’s pretty clear, I believe in democracy.  I believe that traditional Republican voters, like Greens, Libertarians, and Independents, should all have a voice in government because they each represent the views of many voters. Out of many ideas, the best should be implemented. The same should hold true of American businesses.

If you want to be a powerhouse, you need ideas from across a wide number of people and views. Good ideas aren’t confined to one race, gender, political view point, or country of origin.

I used to have some respect for the GOP. I admit I lost almost all of that in 2008 when GOP polices caused the markets to crash and destroyed people lives. When Romney gave his 47% speech, in 2012, I knew I’d never vote GOP again.

At this point, with all that’s been  confirmed as true,  I consider Trump to be an illegitimate president. And all his appointees and the GOP leaders who are happy to go along with him sabotaging the country? To me, they’re basically Quislings.

A democratic government should not be trying to infiltrate businesses to ultimately spy on them, in hopes of …. I’m not sure if it’s limited to just to subvert, manipulate, coerce, or co-opt them to a truly un-American nazi-based agenda or if it goes beyond that to hopes of spying on others there, controlling them, profiting off them through insider trading, gathering compromising info or …..

I don’t care what side of the aisle you’re sitting on, this behavior is un-American. And it was being done while Bannon was White House Chief Strategist. So, this is a White House agenda. Are you listening Mr Mueller of the FBI?

Fair warning to all media and other American businesses, genuine Fifth Columnist spies are out there. Do your due diligence. Don’t hire them. Don’t even interview them. I’m sorry but the WWII poster below clearly shows, we’re still fighting the same war. It’s just now we’re doing it at home. Do your part America. 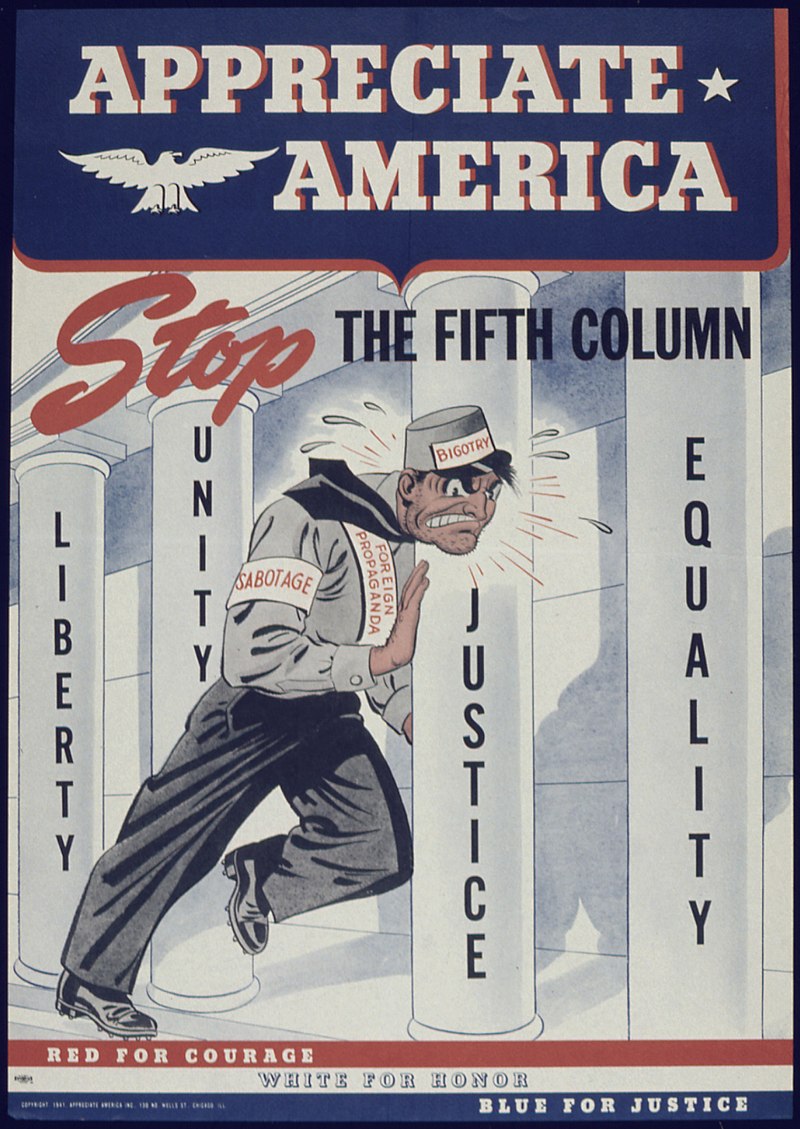