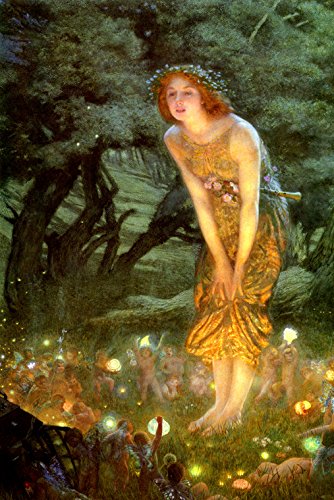 When fairies dance, things get crazy.

Well, it’s taken awhile to get to this, but rest assured, things have been happening.

Midsummer Eve was the day I ended up having to put down my Gran’s dog.  It cast a pall over the house. But there was still a warm furry wandering about, the large tuxedo cat on which to heap attention. Though she hardly glowed with unconditional love.

The following Sunday dawned all well and good. By afternoon, things were pretty normal. My Gran went to church, I took a nap, and my Mum was sitting in the living room in a recliner eating a muffin off a walker tray table and watching tv.

What could go wrong? About 1 hours later, I walk into the living room to find my mother is not in the recliner where I left her. That was odd. I couldn’t think what happened since she can’t walk and every effort to get her to stand on the one good leg is met with fear and trembling and “I can’t do it.”

I noticed the walker that had been in front of her chair was gone too. So I walked further into the room and looked into the dining room and there she was, sprawled across the floor, wide awake.

She said she was fine. I doubted there. She said she’d got up — on her own, with the help of a walker and walked on her non weight bearing leg — about 30 ft. At which point she decided she was too tired to go on, and she tried to sit down, but lost her grip on the counter, and missed the chair she was trying to sit down on and ended up on the floor. Trust me, you don’t have a broken leg. Now let the kitty in, purrrleeez?

My Gran came home as the EMTs arrived. And off we all went again to the hospital ER at 7pm. They did multiple X-rays and CTs. Thankfully nothing was broken, or rebroken.  Although her femur didn’t hurt, she had a giant bruise on the top of her foot, and her proximal tibia, fibia area hurt.

Her Ortho surgeon, Doc Holiday, said no PT for 2 weeks to let things calm down. I’m not sure if he meant her injuries or her nerves. Probably both. At this point, it’s a struggle to raise her lower leg on the leg that had surgery. Kind of a setback for a person who was almost 5 weeks into their recovery and doing great.

You may well ask, what possessed my Mum, who professed to be terrified to get up and stand on even her good let, to get up and walk on her bad one. Two things, as it turns out. One was Norco, it had made her a little loopy and when she woke up from a nap, she didn’t remember she was injured.  At which point, she looked out the glass doors and saw the second thing, the cat.

She thought Gran’s cat wanted inside, and decided to go and let it in because . . . that’s what you do for a cat flopped against a glass door in hot weather, you let it in. Right? Sigh.

In deciding to take my Mum back to Gran’s to do her recovery, I was sure I could keep her from catching fire and falling out of bed. And I did, but she still managed to find a way to fall down and catch fire, so to speak. Was I careless? I don’t think so. It was just … life. And life is tricksy.