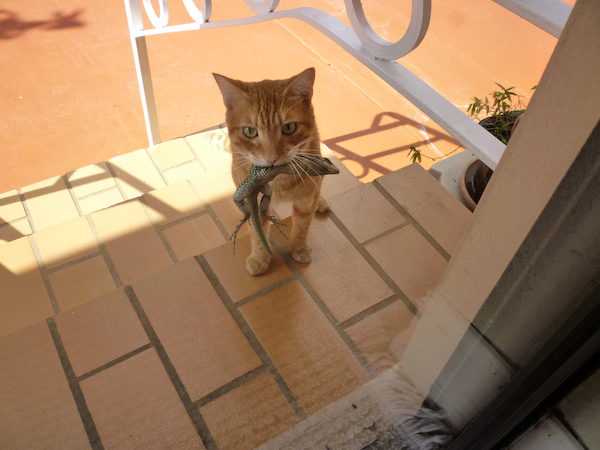 Pips has taken to giving me presents. First, the gopher has been executed, then a fledgling bird, then I saved two other birds, and now  . . .  there are lizards.

I was lucky the first two times. I caught Pips in the backyard with it in his mouth. I was able to release them back into the wild.

The third time was not a charm. It escaped in the house. I trapped it in a hall closet and was able to restore it to the yard.

As for the fourth time, this morning? He brought in a really large whiptail that makes the one in the picture above look a dwarf.

I got him to release the live lizard in the kitchen, but when I went to box it up, it fled under the stove. Sigh.

I sealed the bottom of the stove to the floor with gorilla tape, leaving only one gap. There I taped a ziplock baggie to the floor and the stove. I had a clever plan . . . . .

I would turn on the oven to 300 degrees for an hour ( and simultaneously re-season my iron fry pan — two birds one stone, right?). The heat would force it out into the only available exit, the baggie. Then I’d just carry it out and release it.

Sadly though, the oven didn’t work because the turkey pan somehow jiggled the gas connection to the radiant bar.  The pilot light’s fine but it won’t heat.

Anyway, I’m hoping at some point the lizard goes into the bag, but if not, oh well.  I’m sure it will keep the ants and spiders and flies under control.

I’ve decide to find it charming. I’m going to name it Amelia.